Today I went to the Franklin County Library's used book sale and spent $3.50. Hardbacks were 50¢ and paperbacks were 25¢. Here's what I bought: 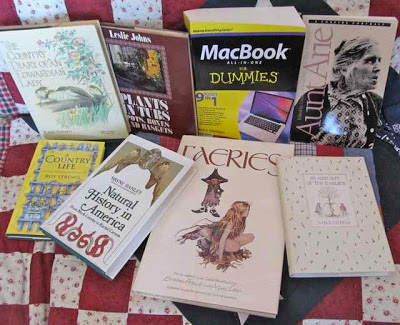 The 1977 facsimile edition of Edith Holden's 1906 The Country Diary of an Edwardian Lady was delightfully illustrated. 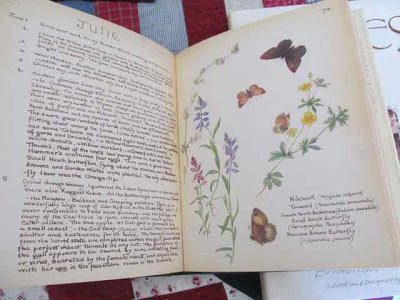 I've long been a fan of the Foxfire books (and I even used to show my junior high students a Foxfire movie about Aunt Arie), so I was glad to get Aunt Arie, a Foxfire Portrait, currently available on amazon for $17.12 (reg. $23).

Roy Strong's A Country Life: At Home in the English Countryside is out of print but available on Kindle for $7.59. The 1994 edition I bought has $19.95 on the flap.

Wayne Hanley's 1977 edition of Natural History in America: From Mark Catesby to Rachel Carson is out of print. The original price was $19.95. Leslie John's 1974 Plants in Tubs, Pots, Baskets, and Boxes was originally $8.95.

Since I have a 2009 MacBook, I figured I should get the manual: MacBook All-in-One for Dummies. This is the 2010 version, but my operating system is Snow Leopard, the one mention in the originally $34.99 book. (Yeah, I'm two operating systems behind. . . .)

I think I got a pretty good deal on my books. And I helped out the Friends of the Library. Later I stopped by the discovery shop where I found a brand new cover for my kitchen stool. Only $2.75—and it matches my favorite tablecloth. 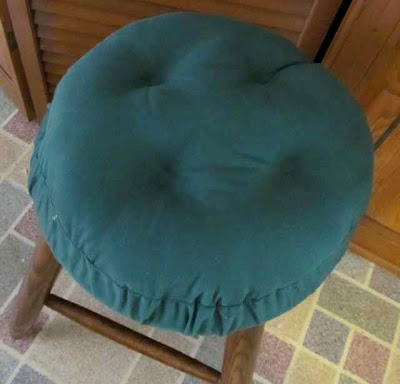 I also found another kitchen item, a Paula Deen 2-quart stainless steel copper-bottomed saucepan with a glass lid. It was pretty well-used, but still in good shape. I figured it was well worth the $2.00.

Later, I looked up the saucepan online. I found a similar one at Walmart online for $32.58. Mine is missing the ring in the handle, though. Home Depot has it for only $29.99.

I guess I did OK for bargain shopping today.