I purchased my last car, a 2003 PT Cruiser, in 2004. I don't buy new cars anymore because new cars rapidly deteriorate in value. 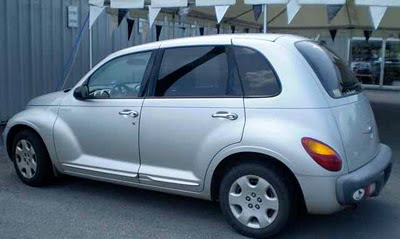 Because that PT is getting old, I figured I'd up-grade—to another PT. I like PT Cruisers—they're cute, peppy, and practical. Plus they're easy for old folks to get in and out of, and they don't have a lot of confusing knick-knacks and doo-dads. They're good basic transportation. And easy to park. But Chrysler isn't going to make any more of them.

So, I went in search of a late model—I wanted one that was still under warranty and preferably a one owner car. I watched ads and checked the Internet for a couple of months. After a while, I zeroed in on this 2008 PT: 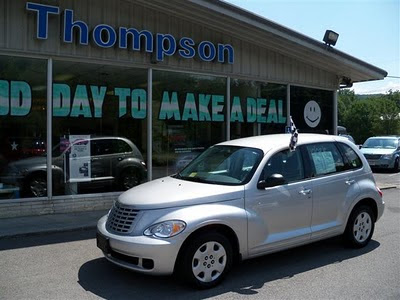 It was nearly two hours away, but I figured it was worth a look. So we drove out there and I looked. My husband looked under the hood. 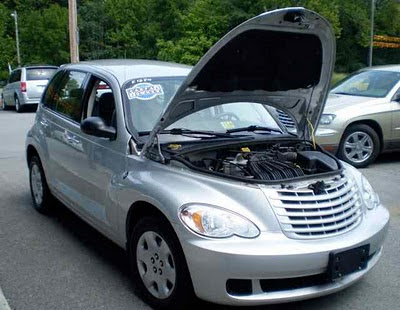 I drove it around the lot, and it seemed to do OK. My husband crawled underneath to see if it was dripping anything. It wasn't. I compared the old with the new—er, the less old. 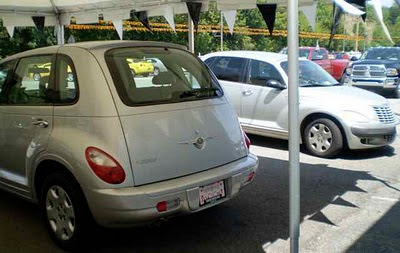 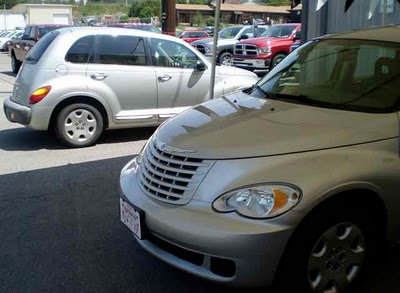 Then I began the process of dickering. You know the drill—the salesman has to run to his manager, they give me a number, I counter with another number, etc. My husband and I went to lunch where we mulled over the "deal." I decided I really liked the car, so we phoned from the restaurant and went back to get it.
The car had been washed and the temporary tag was in place. 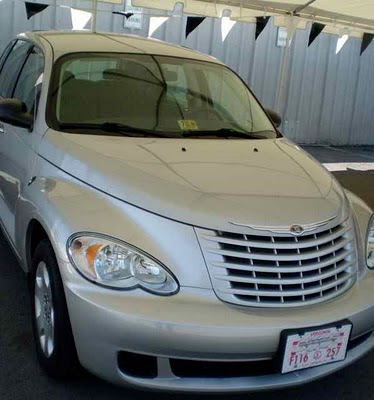 I wrote the check for the amount we agreed upon (I don't do payments) and drove away. . . 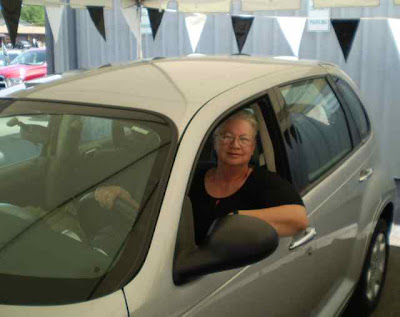 . . . for half what a new PT would have cost me. My husband followed in the old PT as far as Roanoke to make sure everything worked OK. It did.
Now we call the old PT, "Farm Use."
~

Posted by Becky Mushko at 11:21 PM No comments:

Fate and the Fountain

About two months ago, Kroger had a special on a simulated rock waterfall fountain. The the Kroger ad  listed the sale price as $59.95. The regular price was $119. The fountain looked something like this one: 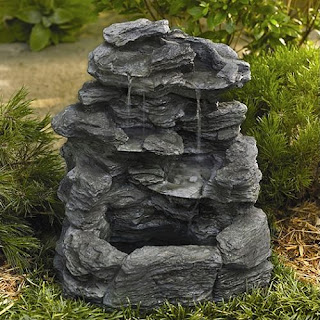 Well, I'd always wanted a fountain, so I decided to get one when we went to Rocky Mount for Senior Citizen's Day (which would knock off another 5%). Unfortunately, they didn't have any in stock but Frank—the manager—said that the Westlake Kroger had one.

Later we went to Westlake, and sure enough they had one. Just one. And someone else had reserved it. A sign attached to the fountain said that the buyer would pick it up the next day. Oh, well—you can't win them all.

A few weeks later, I was shopping at the Westlake Kroger and noticed the fountain was still there. But it had a different note saying a different buyer would pick the fountain up the following Tuesday, which was several days away. Oh, well. . . .

I Googled the fountain and discovered the same model was for sale for various prices, all higher than I wanted to pay:

I figured that I just wasn't fated to be a fountain owner. At least not this year.
And then—last Thursday—we happened to be at Westlake, and we happened to go to Krogers. And, as fate would have it, we happened to see the fountain, with no sign on it. We went in and checked. The fountain—despite still having a $59.95 price tag on it—was available, we were told, for $69.95. The special sale was apparently over. Once I've seen something for a certain price. . . .
However, it never hurts to ask.
They let me have the fountain for 5% off the $59.95 price. Since we'd been to the feed store earlier, we just happened to have the truck. Even though the fountain came in two halves, each weighed a lot and I'm not sure we could have fitted them in the back of the car. The size and weight of the fountain might be why the other folks had decided not to get it.
Doesn't it look nice on my front porch? 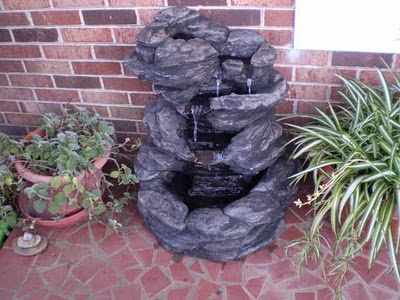 Here's how it looks from a little further back: 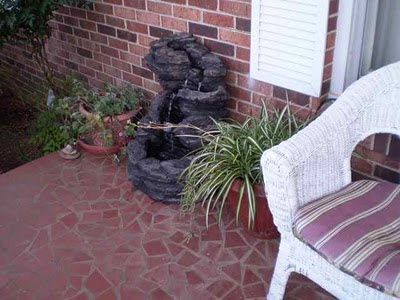 I think it looks pretty good with the wicker porch furniture that I bought at the Discovery Shop a few years ago ($100 for a settee and two chairs—all in pretty good condition).
And those two plants? Someone discarded them a few years ago. They didn't cost me a penny.
I love a bargain!
~
Posted by Becky Mushko at 12:03 AM No comments:

Besides buying the decorated cat pin and the ceramic sheep pin at Westlake Goodwill the other day, I also purchased a butterfly pin. I'd never seen anything quite like it before. 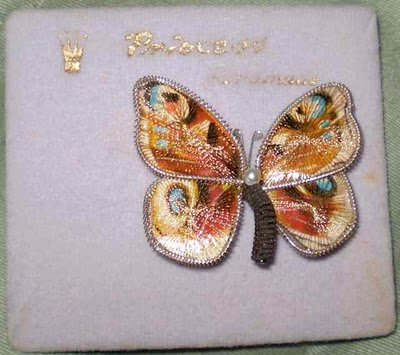 It was still attached to its original card, which looked kind of old. The gold letters on the fuzzy card say " Princess Handmade." Here's what the back of the card said: Hmmm. Real butterfly wings? Gold thread? Even though this piece was more than the usual one dollar for a pin, I decided to get it.
Back home, I did a bit of Googling. Apparently a lot of these pins were made, mostly during the 1940s. Some even came with matching earrings:

On this site, I found two "vintage butterfly pins" for sale for $80.  On an auction site, I found these that had sold for $40. Mine looks similar to the one at the left. 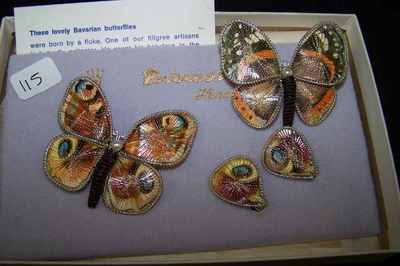